Critics agree that for musicianship and authenticity it doesn't get any better than The Super 60s. They are simply the best at what they do. The Super 60s is comprised of professional musicians who have a deep respect for music from the musically-rich decade of the 1960s. Employing State of the Art sound and lights, they strive to not only reproduce the music, but also the atmosphere from this most influential decade. You are truly transported back in time to those days when life was simpler and music was better.

Craig St. John - Guitar, Lead Vocals: Born and raised in the Chicago area, Craig began his musical education in one of America's first 'mega churches',  the First Baptist Church, of Hammond Indiana. Craig received extensive formal voice instruction, learning to sight read sheet music, develop vocal arrangements, and perform for very large audiences. Craig is a multi instrumentalist playing guitar, keys, saxophone, and percussion who has performed for over 30 yrs, touring the US with the 1980's San Diego based hard rock band, 'Teazer'. Family ties eventually led Craig to the WNC area where he has established himself as a highly respected and accomplished front man/lead vocalist. The youngest member of the Super 60's, at 53, Craig is enjoying the opportunity to share his unique talents with some of the greatest fans on earth, singing some of the greatest songs from the greatest musical era...the Super 60's!

Rick Gundersen - Lead Guitar, Lead Vocals: Originally from Chicago, plays lead guitar and sings lead and harmony vocals.  Rick has a experienced lead-vocal acumen and can hit the high notes like Frankie Valli of the Four Seasons. He has worked with Frankie (Sea Cruise) Ford, The Diamonds, Ronnie Dove, Dee Dee Clark, Paul Revere & the Raiders and many more artists. He has lived in Hendersonville, NC for over 20 years.

Steve Laughter - Bass Guitar, Vocals: Steve started playing bass professionally at that age of 13. On his 13th birthday, he took a fully practiced, professional band into the local Teenage Canteen, and took over the Music Scene in his hometown of Hendersonville, NC. His bands won State “Battle of the Bands” competitions in North Carolina, South Carolina and Georgia during the late sixties and early seventies. He has played with some outstanding musicians throughout his career: Warren Haynes, (The Allman Brothers, Gov’t Mule), Jerry West, (SugarCreek, Band of OZ), as well as playing shows with the full gamut of the Music Industry: Sammy Kershaw, Lorrie Morgan, .38 Special & INXS. Steve studied Music Theory with Dr. Tim Hayden, along with fellow classmates Mike Barnes, “Chipper” Lunsford, and Rick Praytor, all now well-known, accomplished musicians.  Steve was a full-time Graphic Artist for RCA/BMG Records for almost 30 years when this opportunity to play Hit 60’s Music Live became a reality. “This is the music I grew up on, and being able to perform it live again, and see the response is amazing! Each player in this Band was hand-picked.” Steve and Super 60’s keyboardist Dean Landreth have worked together for over 20 years. Super 60’s drummer, Mike Whitt, and Steve played in bands together five nights a week, over 30 years ago. Steve collects rare, vintage Bass guitars, and still has his first ’67 Kalamazoo bass that his Mom bought him almost 50 years ago. His Infamous Quote:  “If life gets dull...risk It!”

​Mike Whitt - Drums: Having been raised in Charleston, S.C., Mike was influenced heavily by the music of the area. Beach music and funk were in its hay-day when he began playing drums in the high school band. His first concert was James Brown and Herman’s Hermits, he hasn’t been the same since! He learned his chops listening to the R & B music of the times. His first band in high school did get to open for groups such as The Tams, Jerry Lee Lewis, Doug Clark and Spyder Turner. During his college years in Georgia, Mike hooked up with some players from that area to travel weekends to Florida, Alabama and Georgia. At that time, he shared the stage with groups like Billy Joe Royal and Smythe to widen his stage experience. Through the years following, he toured the U.S. playing with a variety of groups doing the club circuit and recording. His experience doing Country music, Classic Rock and Roll and Blues has made him a well-rounded drummer with much experience to bring to the stage. He has shared the stage and opened for groups like The Association, B.B. King , Steppenwolf, Allman Brothers Band and Molly Hatchet.

Concessions will be for sale during the concert. For further information about events in Valdese and the full Valdese Family Friday Nights summer concert series schedule, go to visitvaldese.com or call 828-879-2129. 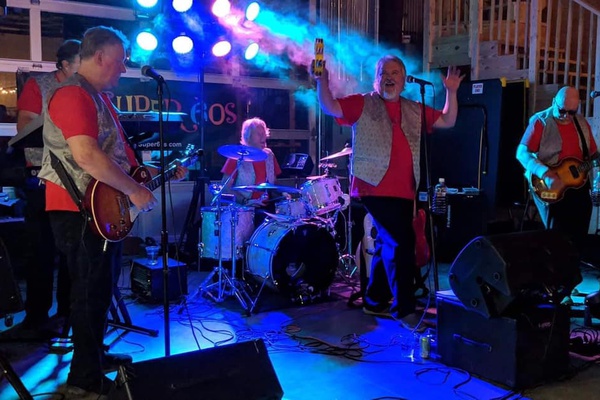